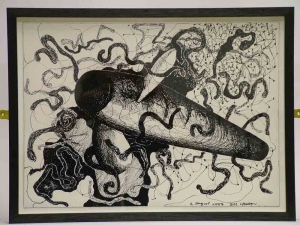 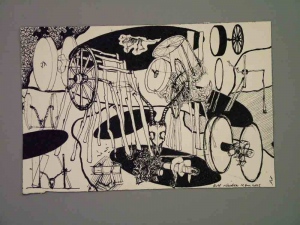 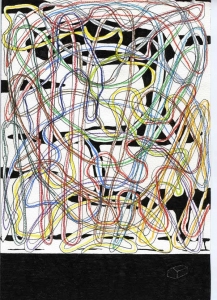 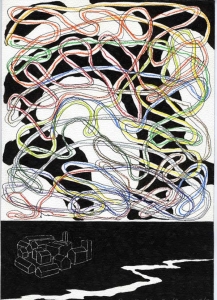 Bill Woodrow became well known for his ingenious ‘cut out’ sculptures in the 1970s and 1980s, using old washing machines, car bonnets and similar objects and transforming them into humorous and inventive sculptures. Woodrow has also cast a series of works in bronze which include his commission to make a monumental sculpture for the fourth plinth in Trafalgar Square, London in 2000. In 2007 Woodrow was included in the final part of the Year of Sculpture series in the Great Hall, Winchester. The exhibition, Brood, featured work from his 1996 – 2007 Beekeeping series and also exclusive pieces, which were created especially for the exhibition. In 1988 he won the Anne Gerber award, Seattle Museum of Art, USA and has been a Governor for the University of the Arts, London since 2003.

Bill Woodrow has exhibited worldwide including the South London Gallery, the Sao Paolo Biennial, La Jolla Museum of Contemporary Art and, in 2001, at the New Art Centre. His work is held in numerous public and private collections including the Museum of Modern Art, New York, USA, Fundacao Calouste Gulbenkian, Lisbon, Portugal and the Rijksmuseum Kroller-Muller, Netherlands. His exhibition Bill Woodrow RA (7 November 2013-16 February 2014) was held in Burlington Gardens, the Royal Academy’s much extended venue for contemporary art, which coincides with the publication by Ashgate of the first comprehensive survey of his work from the 1960s onwards.