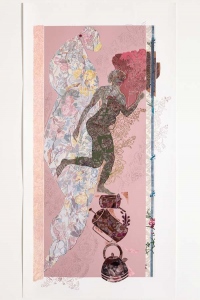 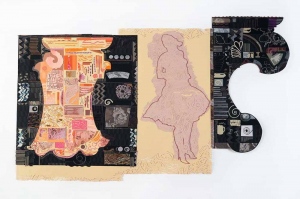 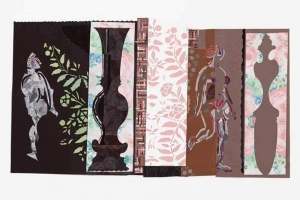 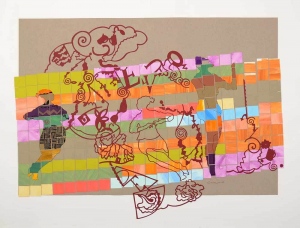 Charlotte Hodes’ practice as an artist takes the form of painting, collage, ceramics and glass. Her ceramic work has been described as “spectacular and desirable”, by art critic Mel Gooding and her intricate papercuts as “painstakingly beautiful” by Dame Rosalind Savill.

Many of her projects are informed by museum collections and archives, researched through the process of drawing. In 2005 she was appointed as the first Associate Artist at the Wallace Collection London making papercuts & ceramics in response to the Museum’s 18th century Fête galante paintings and Sèvres porcelain. This culminated in a solo exhibition ‘Fragmented Images’ at the Wallace Collection in 2007, supported by Arts Council England (ACE) & Arts & Humanities Research Council. Further solo exhibitions include ‘Silhouettes and Filigree’ at the Marlborough Gallery (2009), ‘Drawing Skirts’ at the Baring Wing & University Gallery, University of Northumbria (2008), Clara Scremini Gallery, Paris (2012) and ‘Grammar of Ornament’ at jaggearart, London (2014) .

As winner of the Jerwood Drawing Prize in 2006 she participated in ‘Drawing Breath’, the survey UK touring exhibition of Jerwood prize winners & was one of three exhibitors with the 2010 Jerwood Visual Arts Programme’s show ‘Inscriptions: Thinking/Drawing/Making’ at the Jerwood Space Gallery London.

From 1998 until 2004 she embarked on a series of projects at the Spode factory in Staffordshire, with unrestricted access to their archive transfers, where she worked on ‘one-off’ pieces. This included unique dinner services, one which was exhibited in the 2003 Design Biennial at the Design Museum London and one which was acquired by The Potteries Museum, Staffordshire. In 2002 she exhibited ‘Cacophony; a cabinet of 35 vases’, a ceramic installation at the Victoria and Albert Museum. In 2014 she received an ACE grant to embark on further research in the Spode archive, now belonging to the Spode Museum Trust, with artist Dr. Paul Scott.

In 2007 she was commissioned to make the Arts and Business Awards at Berengo Glass Studios in Venice. Her ongoing relationship with the studio has resulted in her making glass work for the exhibition ‘Glasstress’ at the Venice Biennale in 2009 and 2013.

Charlotte Hodes is Professor in Fine Art at London College of Fashion , University of the Arts London.