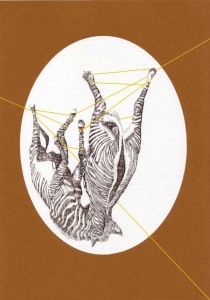 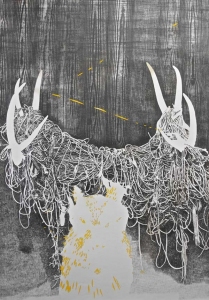 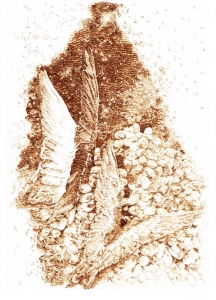 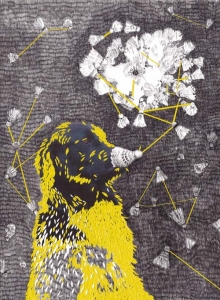 Nina Ogden’s drawings capture her fascination with animals, creating surreal narratives that use obsessive details culled from eggs, bees and tadpoles to examine how man and beast co-exist.

Nina Ogden (b.1980 Dolgellau, Wales) studied at Falmouth College of Arts (1999) and Wimbledon School of Art (2000–2003). In 2003, Nina exhibited at the Centre for Drawing Wimbledon and was also selected for the Pizza Express Prospects 2003 drawing prize

She was awarded a place on the Artsadmin Franko B mentoring scheme in 2006, which concluded with a residency at the Wysing Arts Centre, Cambridge.

Nina has exhibited at the Florence Trust, London; the Museum of Modern Art, Wales and The Veemvloer Gallery, Amsterdam.

In 2008 Nina was awarded second prize in the Oriel Davies ‘Re:Drawing’, Newtown and exhibited at the University of the Arts, London.

Since being represented by the Drawing Gallery from 2009, Nina has continued to exhibit in Wales including the 2011 Ludlow Open and the Oriel Davies Open in 2012.

In 2013, she curated the exhibition ‘Lunar Sea’ at the Transition gallery, London.