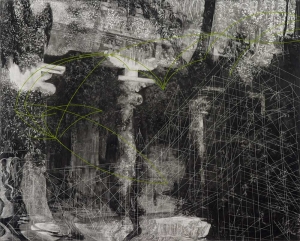 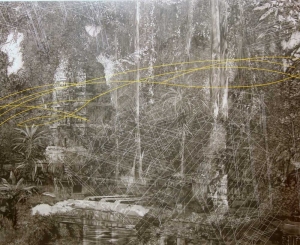 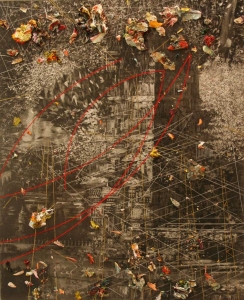 Reginald S Aloysius is a British Tamil Sri Lankan born in London and while initially beginning his studies in Economics and Politics at Manchester University it is this background that has informed his work exploring themes of globalisation, emigration, and destruction of tradition.

Aloysius makes detailed graphite drawings of Indian Hindu temples coupled with a delicate use of paint creating an alluring relationship between drawing and painting. These drawings express an idea of place rather than a definition of space. There is a conceptual continuity in the work between the idea of drawing and the concept of making one’s mark, of recording and inscribing one’s subjectivity. They may also be seen as lines that threaten to turn the surety of national identity into the shifting, nomadic identity of transnational cultures. Through the exploration of the iconography of Sri Lankan and Southern Indian temples, Aloysius tries to investigate the social agency inherent to any cultural choice.

Aloysius travels extensively throughout Asia in particular India and Sri Lanka in order to document much of his source material. After graduating from The Ruskin School of Drawing and Fine Art, Oxford University, Aloysius spent many years freelancing as an Art Technician working directly with artists across Europe before completing a Masters at Kingston University on a research based drawing programme.

Aloysius has been shortlisted for the Jerwood (2011) and Derwent (2013) Drawing prizes and has exhibited at the London Art Fair. He was selected to exhibit at the Colombo Art Biennale 2014 and presented new work at ART 14 London as part of the ‘EMERGE’ section. In 2014 Aloysius exhibited at the Brunei Gallery, London at SOAS, a three month long exhibition of contemporary Sri Lankan artists, the first of its kind in the UK.